Macroeconomics is ubiquitous. Nobody questions its importance. Media commentary on breaking economic data—perhaps the Gross Domestic Product (GDP) and its growth, employment, inflation, or the balance of payments—is almost inescapable. Political campaigns often revolve around starkly conflicting views on exchange rates, movements of jobs across borders, or concerns about government deficits and debt. For a discipline that is called a science, macroeconomics displays a confusing divergence of views on real-world developments.

Understanding economic developments—making sense of the mass of data, debate, and commentary produced every day—is difficult even for experts. It is especially challenging for those whose jobs or studies require that they can critically evaluate macroeconomic developments and policies, who have some university level training, but who have not had practical experience in economic analysis. Our premise is that reporting and debate on macroeconomics can be made understandable if the underlying issues are placed in a broad analytical framework on which economists generally agree and which has immediate relevance to real-world settings.

The aim of this book is to provide such a framework. It is designed for use in courses on applied macroeconomics or for professionals in finance, management, or government and public policy who need to understand macroeconomics.

The manuscript has been filtered through a variety of professional experiences. The inspiration for it started at the International Monetary Fund (IMF) where we were involved in various ways with answering the question “What analytical tools are essential for assessing a country’s macroeconomic outlook and policies and communicating this assessment in the simplest possible terms?” It evolved through work in the private financial sector with portfolio managers who were highly motivated, severely time constrained, and focused on opportunities, vulnerabilities, and risks in the countries in which they were investing. It was subsequently reorganized, broadened, and made more accessible in seminars on Applied Macroeconomics for Economics majors at Bowdoin College.

Our conviction throughout has been that good macroeconomic analysis requires both an understanding of key conceptual constructs and exposure to real-world situations where positions must be taken and decisions made under uncertainty. In this spirit, the book occupies a somewhat unusual niche: it assumes some familiarity with basic macroeconomic models and does not cover the ground in most textbooks, it eschews the higher-level mathematics and technical material of current academic debate, and it focuses on the practical application of macroeconomics to frequently-encountered situations. Thus, for each segment of macroeconomic analysis addressed, the book summarizes key analytical tools and presents thought experiments and exercises that require readers to make decisions and formulate advice in simulations of real-world situations. At the end of the book, readers should be able to evaluate the assumptions and contingencies on which various positions are founded, and the strengths and weaknesses of alternative policy prescriptions.

A few essential requirements for analysis cut across all of the specific topics addressed in the book.

Reading the data. Critical evaluation of real-world developments and policies is impossible without an ability to read the main macroeconomic accounts: the national income accounts as well as the balance sheets and flow accounts of the government, the central bank, the banking sector, and the country as a whole in its transactions with the rest of the world (the balance of payments and the international investment position). Each of these accounts has its own conventions. Once these are understood, the store of data becomes a stepping stone to an appreciation of what is transpiring in and between economies.

Understanding macroeconomic constraints. There are many hard and fast relationships among macroeconomic variables drawn from the different accounts. In the language of economists, these are the definitional identities and adding-up constraints that discipline analysis, policy prescription, and forecasting. Unlike many behavioral models, these relationships are not contentious, and they are essential to an understanding of the economy.

Respecting the demands of macroeconomic sustainability. “Sustainability” (a term that will be used in many contexts through the book) essentially refers to a configuration of policies and economic developments—typically related to economic growth, inflation, credit expansion, the government budget, and the balance of payments—that  does not inherently presage a need for substantial and discontinuous future adjustment. In other words, sustainable policies or developments are those that can reasonably be expected to be steady and predictable in the absence of shocks. Judgments about whether any given set of macroeconomic policies is sustainable must inform all responsible analysis and prescription. Such judgments start with a view of the potential output of the economy—when capital and labor are fully employed but not stretched to a point of continuously rising inflation—which is in a sense the envelope for the macro economy. But they also encompass, among other things, the government finances and the external balance of payments accounts. They influence risk premia in financial markets, and they impinge on a wide swath of private and government decisions. At each level, clear methodologies exist for reaching at least qualitative judgments about sustainability. These form another layer of essential constraints on macroeconomic policies.

Considering policy choices. Policy options in the face of economic cycles are a theme throughout the book. We include a great deal of discussion of cyclical positions (booms and recessions) and the efficacy of policies aimed at reducing the amplitude of cycles (countercyclical policies). The debate on policy options almost always uses tools—like those for assessing potential output or financial sustainability—that are based on (sometimes heroic) assumptions that need to be examined critically. Our experience is that the political process will almost always drive governments to adopt countercyclical policies, and that such policies can do good. But when they are based on an incorrect reading of the data or on unrealistic objectives, they can be harmful and make the economy vulnerable to crisis.

Identifying vulnerabilities and crisis triggers. The policy objective of forestalling economic crises runs though the book. Crises are usually triggered when a shock event exposes a vulnerability in the fiscal or financial system. It is impossible to predict trigger events, but it is possible for policies to make a country’s finances more robust and less vulnerable to these shocks. Significant portions of the coverage of monetary policy, government financing, micro- and macro-prudential policies, and risks in a country’s macroeconomic interactions with the rest of the world (in Chapters 4,5, 6, and 7) are motivated by this policy objective.

Characterizing cross-border economic linkages. The perspective that runs through the book is global. In all of the presentations of data catchment systems and tools for analysis, we emphasize international economic linkages through both trade and global financial markets—how they must be read in the data and how they constrain economic developments and policies in both large and small countries.

We have sought to create as simple a framework as possible by being ruthlessly selective in what we present while acknowledging real-world complexity. Many of the intense debates among academic economists of different persuasions reflect differences in assumptions about how the agents in an economy (that is, consumers and investors, workers, managers, owners, and entrepreneurs) respond to market signals and government policies. The arguments are often couched in stylized models that facilitate elegant mathematical analysis. To the extent that we give these debates and models relatively short shrift, it is because a vast academic literature covers these topics but there is less emphasis on the basic analytic prerequisites that lie behind them and are our main focus. The essence of arguments is usually accessible using the tools we provide.

Each of the following six chapters covers one broad area of macroeconomic analysis.

Chapter 2: the real economy from the perspectives of both potential output and aggregate demand

Chapter 6: financial stability, the financial system, and regulation (including micro- and macro-prudential policies)

Chapter 7: the external accounts (the flow balance of payments and the stock international investment position)

Each chapter starts by outlining the principal concepts covered and ends with exercises to test comprehension. Analytic and diagnostic techniques are presented with numerous detours to illustrate how they have been used to understand or address actual macroeconomic issues. Throughout the book (and especially the exercises) the reader is forced to adopt the perspective of a decision maker or advisor: (s)he is called upon to diagnose developments and advocate policies or assess opportunities.

Companion online material provides answers to the exercises and presents three full length case studies that allow the reader to use the tools of the main volume to interpret the problems and consider the policy choices in the actual historical circumstances of the case-study countries.[1]

The book is necessarily sequential in its coverage. But it is impossible to discuss demand and supply (covered in Chapter 2) or monetary developments (in Chapter 4) without acknowledging the influence of government operations and international economic relations on them, even though the fiscal and external accounts are only covered fully later in the book. The summary and intuitive treatment of these topics in chapters before they are covered in depth should suffice for the level of analysis required; readers, however, will gain a richer appreciation of some of the material treated lightly in these earlier chapters when they get to the more in-depth subsequent coverage. Also, it is suggested that readers return to some of the exercises in earlier chapters as they progress through the book and become capable of more comprehensive analysis.

Finally, this book is intended as a guide, not an academic treatise. We provide few citations or references to the academic literature, even though the book obviously draws on that body of work. In the main, the economics behind our analytics is so much a part of the standard curriculum that it defies specific attribution. We are enormously indebted to colleagues at the IMF who over the years taught us most of what we know. We hope we have gotten it right.

[1] The online teaching material is available to instructors without charge at www.cambridge.org/Lipschitz and to those using the book for self study by following the instructions at macroeconomicsforprofessionals.com. Each of the case studies casts the reader as part of a team charged with evaluating a country’s policies (and a cache of data provided) from a particular perspective and at a particular time. The first case study covers the Latvian financial crisis of 2008 and the exercise requires the reader to consider alternative policies that might have forestalled the crisis or lessened its intensity. The second case study deals with Greece in 2010—a classic fiscal crisis, albeit with some unique characteristics. The reader is asked to examine the relevant data at the time and to advise on whether to retain, increase, or liquidate holdings of sovereign debt. The third case study deals with South Africa in 2013: not a crisis but a situation where severe structural impediments militate against achieving satisfactory growth and employment outcomes and raise questions about longer-term sustainability. 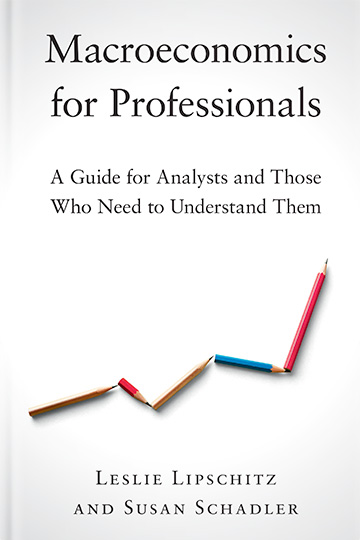